WHAT IS DAVIDIC DANCING?

WHAT IS DAVIDIC DANCING?

Davidic Dancing is a way of praising God, like with the singing of hymns.  In Psalm 149:39(a), the dancing referred to is the kind where everyone danced together, in a circle, in praise of Yahweh.

In Old Testament times, the scriptures were recorded by Jews for Jews.  So there was no need to explain the customs.  The Psalm writer/s would have been amazed to know that after 2000 years, Gentiles would be reading their writings.  Gentiles who have different customs and have little knowledge of the things that were taken for granted in their day. Like, for instance, the fact that everyone participated in cirlce dances and processionals when praising God in the Temple (for as long as the Temple stood in Jerusalem).

"O Israel, rejoice in your Maker. O people of Jerusalem, exult in your King. Praise his name with dancing, accompanied by tambourine and harp. For the Lord delights in his people..."

he would have expected that everyone understood that dance was a regular occurance in the Temple, as a form of praising God.

In Psalm 26:6 (as it is translated in The Message) the Psalm writer gives us a glimpse of what congregational dance was like during the time when the Psalms were written.

" I scrub my hands with purest soap, then join hands with the others in the great circle, dancing around your altar, God, singing God-songs at the top of my lungs, telling God-stories."

In the early days of the Christian Church, congregational dance continued as a means of praising God and 2 of the earliest liturgical writers, Mater Hippolytus (200 AD) and Justin Martyr (100-165 AD) both describe, in detail, the use of joyful circle dances as part of the church liturgies ( "liturgy" refers to the things that the congregation participated in, in the church service).

There are many quotes from the early Church Fathers, encouraging people to praise God with dancing.

Here is one of them:

"Let's dance as David did. Let's not be ashamed to show adoration of God. Dance uplifts the body above the earth into the heavenlies. Dance bound up with faith is a testimony to the living grace of God. He who dances as David danced, dances in grace."

So let us joyfully praise our God, in the dance as well as with singing and music!

You need to be a member of . to add comments!

Praising the Lord in song and dance

Thank you for creating this site. It's nice to know that others worship the Lord as we do. Our church is called "The River Fellowship" and we meet on Friday evenings. We worship the Lord with Flags,…Continue

Are there any other Davidic Dance groups out there?I would love to be part of a network of groups who "Praise God with Dancing". (ie specifically Davidic Dancing)Continue

Are there any other Davidic Dance groups out there?I would love to be part of a network of groups who "Praise God with Dancing". (ie specifically Davidic Dancing)Continue 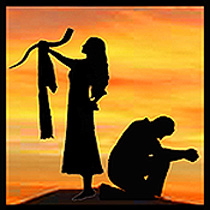 I am studying true fruits of God's Spirit and would love to get some input from others. Anyone up for the challenge?Continue